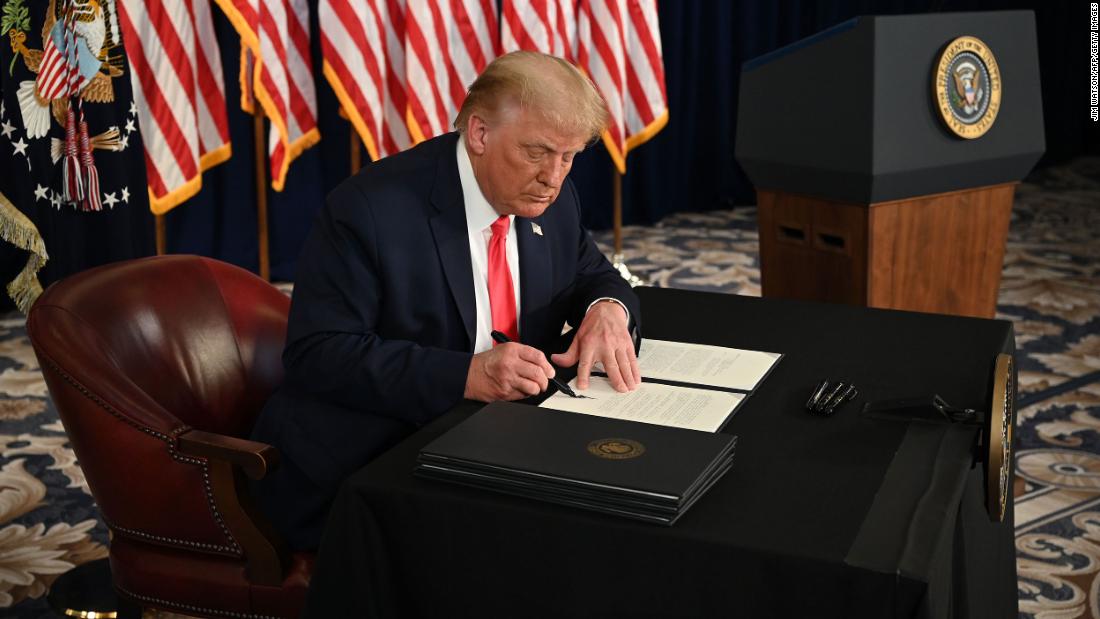 Under the memorandum the President signed Saturday, a state must agree to enter into a financial arrangement with the federal government for any unemployed person living there to get any of the additional benefits.

The federal government would require states to pick up the tab for 25% (or $100) of the $400 additional benefit each person may able to receive weekly in additional aid. That initiative was criticized by several governors because of how financially strapped many states are due to the coronavirus.

Trump said Sunday it was possible that the federal government could pick up the entire cost if governors make a request.

“We have a system where we can do 100% or we can do 75%, they pay 25, and it will depend on the state,” he said to reporters before returning to the White House from his resort in New Jersey. “And they will make a application. We will look at it, and we’ll make a decision.”

“So you know, they may be, they’ll pay nothing in some instances or maybe they’ll — a little bit like the National Guard, like the National Guard, as you know. Sometimes we’ll pay all of it depending on the tragedy, or whatever it may be, the disaster,” he said. “Sometimes the state will pay 40%, 25%, 10% or nothing — depending on how it works out.”

Several experts told CNN there are major questions about how many states may be able to afford the extra cost. If a state says that it does not have the funds or does not want to enter into the agreement with the federal government, the unemployed people in that state would receive zero dollars in the extra benefits (they would still receive the normal state unemployment insurance).

Also, because Congress has not authorized an extension of extra federal unemployment assistance, the state will have to set up an entirely new system to deliver the additional aid, which could take months.

This story has been updated with more information about Trump’s memorandum.